At the Leiden University Medical Center in the Netherlands, laptop computers were introduced in medical education starting September 2000. This introduction was performed bottom-up (at student level) at a time when the educational program and individual faculty members were not prepared for this innovation. In this article the authors studied the changes in student use and perceptions of laptop computers in the period 2001-2005. They found that faculty had to adapt their teaching styles and educational programs before the laptops could be used most efficiently. Also students needed some time to discover the benefits of the laptop. Currently, the use of laptop computers is well integrated into teaching and learning.

The use of computer technology in medical education has increased enormously during the last decade. The use of computers in teaching and learning is common in many schools now, and a digital learning environment has become almost indispensable.1 Computers in education provide opportunities for more efficient and effective learning, but are also of enormous value in preparing students for their professional lives after graduation. Computer literacy of students and teachers has increased so dramatically during the last decade that it is no longer a serious concern in most schools.2,3

Leiden University and its Medical School, both founded in 1575, are the oldest academic educational institutions in the Netherlands. The medical school is now part of the Leiden University Medical Center (LUMC), which also conducts patient care and biomedical research. The curriculum consists of six years of study, of which the last two years are clinical rotations. Each year 345 students enter Medical School and 65 students enter the School for Biomedical Sciences.

In 1999, a new student-centered and patient-oriented curriculum was introduced in the Medical School. In this curriculum, less time is devoted to large-scale lectures and more time is spent in small-group discussion sessions and self study. As a result, individual search for information and presenting results into documents becomes important. In order to facilitate these activities, the board of the institution decided to introduce large-scale computer facilities for students. Until then, students could only access a large number of high-quality computer-based educational materials through institutional computer workstations, but had no access to any other computer or network facilities. Therefore, new computer facilities were created in the medical library, and complementary document printing on ten network printers across campus was introduced. A self-developed learning environment on the Internet was offered, which eventually became a natural stepping stone to Blackboard, the commercial learning environment used since 2003.

In September 2000, a laptop project was started as another tool to obtain the stated goals. Laptops were introduced in addition to the existing desktop computer facilities, resulting in a ubiquitous computing environment. Every first-year student was given the opportunity to purchase a laptop computer at a special discount of 50%. During the first three years of this project, voluntarily participation was over 90%. Since 2003, students have been required to purchase a laptop from a provider of their own choosing, and, as a result, by 2005 almost every student at LUMC had a laptop. Exclusively for the student laptops, a wireless network environment was created at the most important educational sites on campus.

The board of the LUMC decided to switch to student laptop use for organizational as well as educational reasons.4,5 The new curriculum and increasing student numbers forced the organization to increase the number of computer workstations drastically. Shortage of physical space in the hospital environment and the required new hardware and services both predicted high future costs. By supporting the students in buying their own laptop, costs for space and hardware were reduced enormously and system management was transferred from the organization to the student. Secondly, future physicians need competences on using computers, network facilities and (medical) software applications. The possession of a private laptop forces the students to learn these techniques more quickly and thoroughly. We believe that students will become more comfortable and computer literate using their own laptops rather than using only institutional computer workstations.

In this article, we describe the changes in student use and perceptions of laptop computers at LUMC in the period from 2001 to 2005. Data on laptop use were obtained by questionnaires. Finally, the results of this study are projected to the situation on computer use in the academic year 2007/2008.

The introduction of laptop computers in the curriculum at LUMC was a major change and we anticipated a great effect on the students and their education.6 How often do students use the laptop and how do they use it? Did the curriculum change as a result of providing more computer facilities to students? If so, what were those changes? In order to answer these questions, a questionnaire consisting of 18 questions was developed covering topics such as application usage, help desk support, and educational value. Each question was scored on a five-point Likert scale (1 = never/disagree, 5 = very often/strongly agree). The questionnaire has been approved by the department chairs involved in this study.

The questionnaire was distributed in the spring of 2001 and in the spring of 2005 among all 410 first-year students in both Medical School and the School of Biomedical Sciences during one of the main lectures. All answers were administrated and scores were summarized. By comparing the results from both years, changes in computer use over a period of 4 years could be identified. The students who did not have a laptop returned the questionnaire reporting this fact and without answering the 18 questions.

In 2001, 209 of 410 (51%) students filled out the questionnaire. Among those students, 14 reported not having a laptop (7%). In 2005, 207 of 410 (50 %) students replied. Of these students 9 had not purchased a laptop (4%), although at that time the possession of a laptop for education was compulsory. In general those students indicated that they could perform educational tasks without a laptop or with their desktop computers at home. In the text of this article, the sum of percentages of students who indicated a Likert score from 3 to 5 (“mean” up to “very often/strongly agree”) are presented as a single score. The results from the students in the Medical School and the School of Biomedical Sciences are presented as one score. Full details are summarized in Table 1.

The use of a number of computer facilities showed hardly any difference or only some small increase in use over the four years. E-mail use increased from 78 to 84 percent, internet use from 81 to 93% and the use of computer-based education from 45 to 51%. Also the use of the laptop for
Word was stable at close to 81%. Use of the laptop for assignments and group meetings clearly increased from 35 to 62% and 18 to 41%, respectively. Microsoft PowerPoint use increased from 8 to 23%. In 2005, 17% of the students indicated that they used laptops to contact faculty while only 9% did so in 2001. 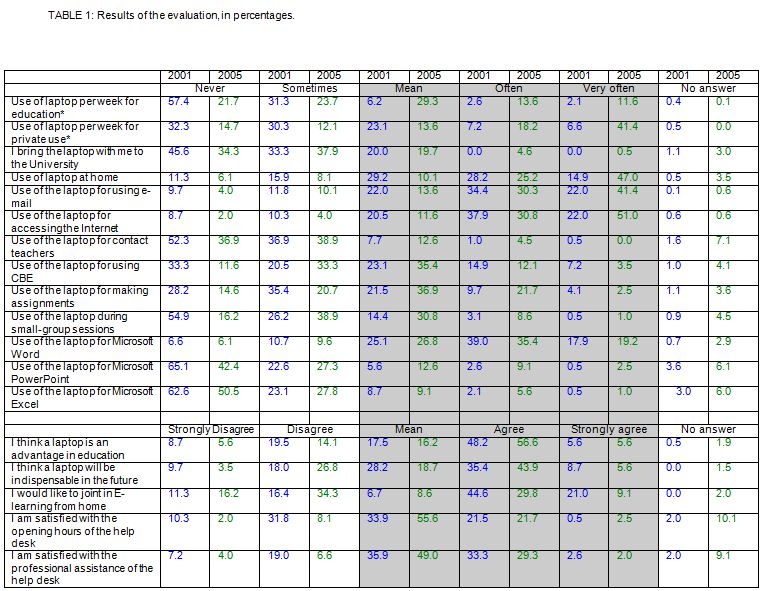 Finally, students were asked about their own vision of the use of laptops in the future of medical education. Almost 80% of the students believed that laptops will be beneficial to education and will even be indispensable in the future. Surprisingly, the support for e-learning from home decreased drastically in 2005 (47%) in relation to 2001 (72%).

During the first measurement in the spring of 2001, laptops had been introduced as an educational tool as part of the curriculum at LUMC for only eight months. Faculty members at that time were not fully prepared for the introduction of this new technology, and consequently students were very unsatisfied about the fact the laptop was not well integrated into the curriculum. This explains the low scores they gave on their general use of the device. Four years later, faculty had adapted their educational programs in favor of more laptop use. This resulted in a clear increase of laptop use for assignments and group work. In the small-group sessions, presentations are commonly used to inform group members of each others’ homework. This explains the reported increase in general educational use of laptops in 2005 and the increased use of PowerPoint. These figures clearly show that achieving success in integrating a new device or technology into the curriculum strongly depends on the way faculties accept and use it. The fact that a few computer facilities are just used a little more in the School of Biomedical Sciences can be explained by a slightly different concept of curriculum. 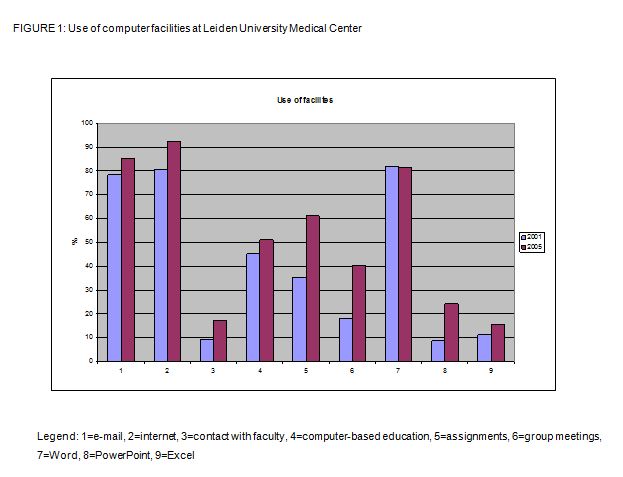 The small increase in the use of the laptop for e-mail, Internet, computer-based education, and Word was expected and is not significant. Levels of usage were already quite high in 2001 and there was no reason to expect a spectacular increase in 2005. Students in 2001 came to Medical School with high levels of basic computer literacy.

Students are convinced that the computer will become significantly more important in education and even indispensable in the future for them as students and as professionals. This is in line with all other predictions about our future and the important role of technology in it. It is surprising, however, that students now do not support e-learning as much as they did four years ago. A possible explanation may be the fact that in 2001 the new curriculum was only in its second year. At that time, students and teachers were dissatisfied with many elements of the new educational program. As a result it might be possible that a lot of students preferred a new and exciting alternative like e-learning more than the traditional curriculum. Four years later, the quality of the curriculum has been greatly enhanced after several quality processes and evaluations. As a result, students today may have come to appreciate the kind of patient-oriented education in Leiden much more than they did before, making e-learning lose some attractiveness. Further, for distance learning the physical distance between home and Medical School is not an important issue for most LUMC students, since the campus is centered inside the small town of Leiden where almost all students live.

Eight years after the introduction of laptops in education and after years of curriculum adaptation, laptops are currently quite well integrated into the medical curriculum. On campus, the mobile device is primarily used during small group meetings and practical instruction sessions. Students wirelessly access the internet to search for information needed. For many anatomy and pathology classes, teachers incorporate public databases with microscopy slides in their teaching. Students visit those sites themselves during sessions or at home. Presentations are prepared and presented using PowerPoint and data are processed using statistical software packages. At this point the laptop has become the standard tool for students and teachers for working on their assignments. Starting 2007 the student laptops have also been used in a campus wide pilot investigation to implement an audience polling system to support interactive large group discussion sessions.7,8

At home the laptop is used by most students as replacement of a desktop workstation. Word processing and internet access are the major activities performed. An internal study of Leiden University in 2005 showed that over 80% of the students in Leiden used broadband internet facilities in their homes. The intense use of Blackboard for last minute announcements and file distribution has urged students to access the internet on a regular basis, at home as well as on campus. As a result the laptop has become indispensable during almost all major educational activities.

It takes time to fully incorporate any new technology into a curriculum. At our institution, faculty had to adapt their teaching styles and educational programs before the laptop computers could be used most efficiently. Students also needed some time to discover the benefits of the laptop. Laptops were eventually fully integrated into the curriculum. In general, students are quite computer literate when entering Medical School. Our data indicate that students at LUMC primarily use their laptops at home and they do not believe in a future with a lot of distance learning.