It is a universal phenomenon that students often choose not to attend college classes. There are a number of reasons for this, but the effect of absenteeism is uniform, in that it can directly affect the students’ academic grades. The objectives of this study are: (i) to estimate the prevalence of student absenteeism, (ii) to observe the association between absenteeism and academic performance and (iii) to review student activities during the absenteeism.

A cross-sectional questionnaire study was carried out among 300, third year medical students attending the King Saud University. The questionnaire consisted of items related to the pattern of absenteeism (frequency, timings and reasons for being absent). The student’s G.P.A was considered to be an essential marker of student performance. Only the questionnaires with complete information were considered for analysis. Data entry and analysis were carried out using the EPI Info 2003 Program and SPSS/PC+ statistical software. Out of 300 students, 172 responded with complete information. The response rate was 57%. The mean GPA for male students was 3.74 and for female students was 3.94. Students without a history of absenteeism had a higher mean GPA (4.05) in comparison with students with a history of absenteeism (3.75). The usual time of absence was during the morning and in the pre-examination period. The primary cause of student absenteeism (61.83%) was over-sleeping. The other major causes were studying (28.01%) or socializing with friends (10.14%). From the results of this Study it can be concluded that class absenteeism by medical students can significantly affect academic performance. Appropriate measures are therefore required to reduce student absenteeism.

Regular class attendance is related to a student’s commitment to pursing education either at a school or college. Professional courses such as medicine require high attendance. The aim of undergraduate medical education is to produce a physician with adequate knowledge of health and disease, reasonable medical skills and a healthy attitude towards patients and their families.1 Even though there have generally been many changes in the way medicine has been taught in the Kingdom of Saudi Arabia, some medical colleges are still following the traditional lecture format of teaching. Lectures and classroom discussion represent the primary means of teaching for undergraduates. Do students who miss a lot of classes perform poorly on exams because they were not present when the topics were covered or, alternatively are students with high levels of absenteeism less committed to academics in general? The effect of on-line lecture recordings in relation to lecture attendance and continuous assessment in pharmacology students was reported.2 While absenteeism among students in other professional courses has been addressed in several studies, the effect on medical student grades has not been evaluated.3,4 The causes of absenteeism by medical students have also received little attention in the literature. An exploratory study on absenteeism and the academic grades of medical students was carried out with the objectives: (1) to quantify the prevalence of lecture absenteeism among 3rd year medical students, (2) to quantify an association between the absenteeism of 3rd year medical students and their academic grades and (3) to find the reasons for absence and the activities of students during their absence.

A descriptive cross-sectional study was conducted during the academic year of 2006/2007, among the 3rd year medical students, at the King Khaled University Hospital, Riyadh. The study subjects were 300 male and female students. A structured pre-tested questionnaire was developed with the questions related to patterns of absenteeism, reasons for absenteeism, and activities during absence from classes. Data relating to the number of study hours per week, GPA (Grade Point Average) and individual student opinion about absenteeism were also collected.

Data entry and statistical analysis were carried out using EPI Info 2003 and SPSS/PC+ (Version 11.0) statistical software. Descriptive statistics (mean, mean standard deviation and proportion) were used to summarize the quantitative and qualitative variables. The individual Student’s t-test and one-way analysis of variance (ANOVA) were used to compare the mean values of the continuous variables across the levels (2 and 3) of categorical variables. A Chi-square test was used to observe the association between two categorical variables. A p-value of <0.05 was considered as statistically significant. 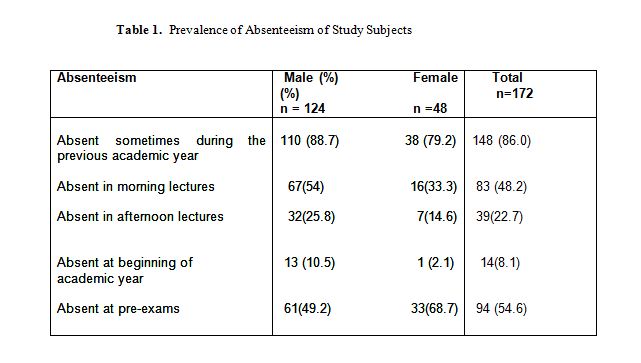 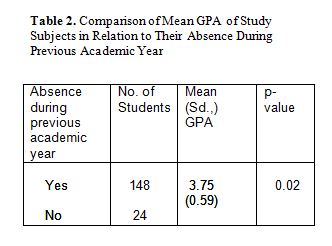 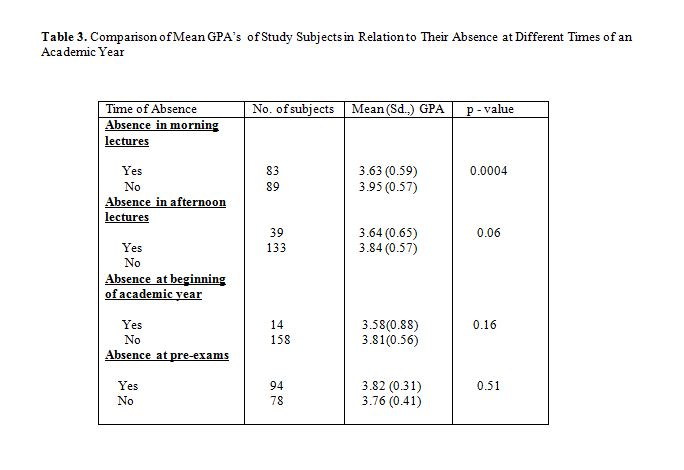 The main reasons stated by both male and female students for absenteeism were lengthy lectures and a lack of interest in the lecture subject. The stated activities during absence from lectures were sleeping, spending time with friends and studying. Approximately 48% of female students and 28% of male students spent time in studying when they were absent during lectures.

This study provides an assessment of the consequences of absenteeism on student academic performance. The correlation between absenteeism and low GPA achievement among medical students has not been studied extensively. Even though this study has limitations (questionnaire based data, low sample size and recall bias), the findings suggest that mean GPA performance is significantly affected by absenteeism. These findings are in line with Anwar Hamdi whose study found that absenteeism had a significant effect on the level of achievement in medical pharmacology courses, and suggested the importance of regular attendance as an effective way of increasing test scores.5 Fernandes and coworkers reported that continuous assessment marks were lower in pharmacology students, where students followed online lecture recordings and reduced their lecture attendance.2 Also, it has been reported that good attendance showed good results and those with poor attendance are at risk of poor performance during examinations in basic medical sciences.6

Concurrent with modern education technology, some of the medical colleges in Saudi Arabia continue to employ didactic teaching in the medical education curriculum. Well organized and carefully presented lectures provide an up-to-date view of the subject.7 They are invaluable for imparting in-depth knowledge to the entire group of learners at the same time, thus saving time and resources. Since the entire class is exposed to a single teacher, uniformity of the teaching experience is ensured.7 However, the learner must be physically present and mentally receptive for learning to occur. The subjects in this study had different patterns of absenteeism during their academic year. Approximately half the students stated that their usual time of absence was for the morning lectures and sessions, showing that medical students do not prefer early sessions, possibly due to their tendency to study during the late hours of the night, thereby over-sleeping in the morning. Only small numbers of students had a history of being absent in the afternoon and even less had a history of being absent early in the academic year, which shows that students are more active in the afternoon, and that all students are eager and enthusiastic to start their education early in the academic year. A higher proportion were absent in the pre-examination period, which could be explained by their allocating this time for more intensive study before the exams. Regarding the student opinions on the effect of absenteeism and their academic performance, most of the students considered that their absences did not affect their grades in any way. But an inverse relation was observed between their views and their GPAs.

This study highlights that while student absenteeism may contribute to low achievement, the reverse is also possibly true, where low achievers are more likely to absent themselves than higher achievers. Under-achievement assumes critical importance for medical care providers who are involved in decision-making in life-and-death situations. Attempts should be made to identify potential under-achievers before their entry into the medical curriculum. Prompt remedial measures should be taken to prevent the cycle of absenteeism and under-achievement, which has a snowballing effect. Further studies are required to investigate the micro approach to resolving student absenteeism for particular sessions and their performance in examination questions associated with those sessions.

The authors are thankful to Abdulmajeed al-Ahmari, Sulaiman al-Mutairi, Abdullah H. al-Anizi, Mohammed S. al-Mijil and Fahad N. al-Mohayd for their contributions to this project.