The average score on the post-laboratory test was significantly higher than the pre-test (p<0001). On the final examination, the entire class (p=0.08) and the lowest quartile (p=0.05) of the class answered more Autopsy Review Laboratory-related questions correctly than unrelated questions. Students also favorably rated the Autopsy Review Laboratory for reinforcing concepts of General Pathology by application to real patients (4.18 out of a 5-point Likert score); for illustrating the value of an autopsy (4.12/5); and for encouraging autopsy requests when they care for patients in the future (3.93/5). Pathology faculty and residents observed that the exercise provided a valuable supervised teaching experience for resident training.

The Autopsy Review Laboratory provides medical students with an effective and enjoyable learning experience for clinicopathological correlation and integration of General Pathology concepts. In addition, the Autopsy Review Laboratory enhances student appreciation of the value of an autopsy and allows Pathology residents to cultivate their teaching skills in a supervised environment.

Recent innovations in medical education have featured early integration of clinical medicine into the curriculum as a strategy to engage medical students’ interest and facilitate recognition of the relevance of basic sciences to clinical practice.1 In our first-year General Pathology course, illustrative patient-based case presentations are offered whenever possible in lectures and in practical laboratories to demonstrate principles of General Pathology. An Autopsy Review Laboratory (ARL), utilizing actual autopsy cases, was designed to provide an effective learning experience for the integration of General Pathology concepts in a clinicopathological context. Autopsy cases illustrating the basic concepts previously introduced in the course were pre-selected for use in this educational endeavor.

The six-week, 22-hour General Pathology course at Mount Sinai School of Medicine, given during the Spring semester of the first year, is divided into weekly modules covering the basic concepts of General Pathology: Cell Injury, Inflammation and Repair, Hemodynamic Disorders, Immunopathology, and Neoplasia. Content is provided in lectures, with practical laboratories and team-based learning exercises designed to reinforce the concepts covered. The ARL, an educational exercise given in the final week of the General Pathology course, was introduced in 2006. This one-hour laboratory was repeated in two sequential sessions, to accommodate the entire class of 120 students. Four autopsy cases were selected to highlight and integrate specific basic principles of General Pathology previously presented in the course: 1) Metastatic adenocarcinoma of the breast [Neoplasia]; 2) Tuberculosis with secondary amyloidosis [Inflammation, Immunopathology]; 3) Obesity with deep vein thrombosis and pulmonary embolus [Cell Injury, Hemodynamic Disorders, Nutritional Pathology]; and 4) AIDS with multiple infections [Inflammation, Immunopathology]. Fixed organs for each case were displayed at four separate stations in a large lab. Under the supervision of faculty instructors, senior Pathology residents briefly presented the clinical history of each case and discussed the pathologic findings and their clinical relevance with small groups of 15 students that rotated among the stations at 15-minute intervals. In addition, students were encouraged to identify how autopsy findings contributed to the clinicians’ understanding of the clinical course for each case (Figure 1).

Pathology faculty provided the participating residents with a pre-laboratory review of teaching methods and required content. Faculty emphasized key points in the case histories and the salient gross findings and their differential considerations. While the ARL was designed to be informal and interactive, the Pathology residents were provided in advance with a written syllabus that included pertinent questions (along with suggested “answers”) to incorporate into the discussions for each case. All syllabus topics in the autopsy review laboratory had been covered in previous modules of the course and were considered critical concepts of General Pathology. During the laboratory, one or two senior faculty members rotated among the stations and observed the resident-student interactions and participated occasionally in the discussion, as needed. After the exercise, the faculty solicited the residents’ feedback about the exercise and provided informal feedback to the residents about their teaching efforts with suggestions for future encounters.

Students’ response to the Autopsy Review Laboratory was solicited in required, anonymous, post-course evaluations in 2006 and 2007. Questions regarding the ARL were assessed by a 5-point Likert score. Voluntary free-form comments were also reviewed.

In the second year after the introduction of the ARL, its effectiveness as a short-term learning aid for the students was assessed in 2 ways, using (1) “closed-book” pre- and post-ARL multiple-choice quizzes and (2) the final examination. The quizzes consisted of 12 multiple-choice questions covering basic concepts, which had been highlighted in the 4 autopsy cases. All students took the required online, pre-ARL quiz during the weekend before the Laboratory. The post-ARL quiz was administered in-class to the students participating in an elective final course review conducted by the course director two days after the ARL. Sixty-six students took the post-ARL quiz. Performance improvement for the 66 students who took both the pre- and post-ARL quizzes was assessed using a paired t test. In addition, student performance on seven ARL-related final exam questions (“related” questions) was compared with seven randomly selected, unrelated questions (the “unrelated” questions). Specifically, the numbers of related and unrelated questions each student answered correctly were compared using the Wilcoxon signed ranks test.2 Under the hypothesis that educational interventions may be most effective for students who do not perform as well, we also repeated the above analysis on students who scored in the lowest quartile on the final examination as a whole.3

The Associate Dean of Undergraduate Medical Education, Mount Sinai School of Medicine, submitted and received Institutional Internal Review Board (IRB) waiver to use any student survey data for publication.

Statistical analysis of the means of the pre- and post-ARL quizzes (66 students) showed that the average score was 1.4 points higher on the post-test (8.6 vs. 7.2 out of a possible 12 points), and that this difference was highly significant (p<0.0001). Evaluation of the final examination showed that for the class as a whole, students on average correctly answered more of the related questions than the unrelated questions, although this difference was not statistically significant (p=0.08). For the students scoring in the lowest quartile on the final examination, this tendency was greater (p=0.054).

Students were generally enthusiastic (Likert scores ≥ 4/5) about the ARL as a teaching exercise for reinforcing concepts of General Pathology and for illustrating the value of an autopsy (Figure 2). In addition, students provided many positive, free-form comments about the ARL in response to an open query in the course evaluation asking for examples of course strengths. Examples of such comments included: “The autopsy lab was phenomenal in integrating all of the material that we have learned;” “The autopsy at the end was very good to tie things together;” “I also really enjoyed the autopsy review lab.” No spontaneous negative comments about the ARL were submitted.

Pathology residents reported that they enjoyed the experience and believed that they improved their teaching skills via pre- and post-exercise suggestions provided by the faculty. 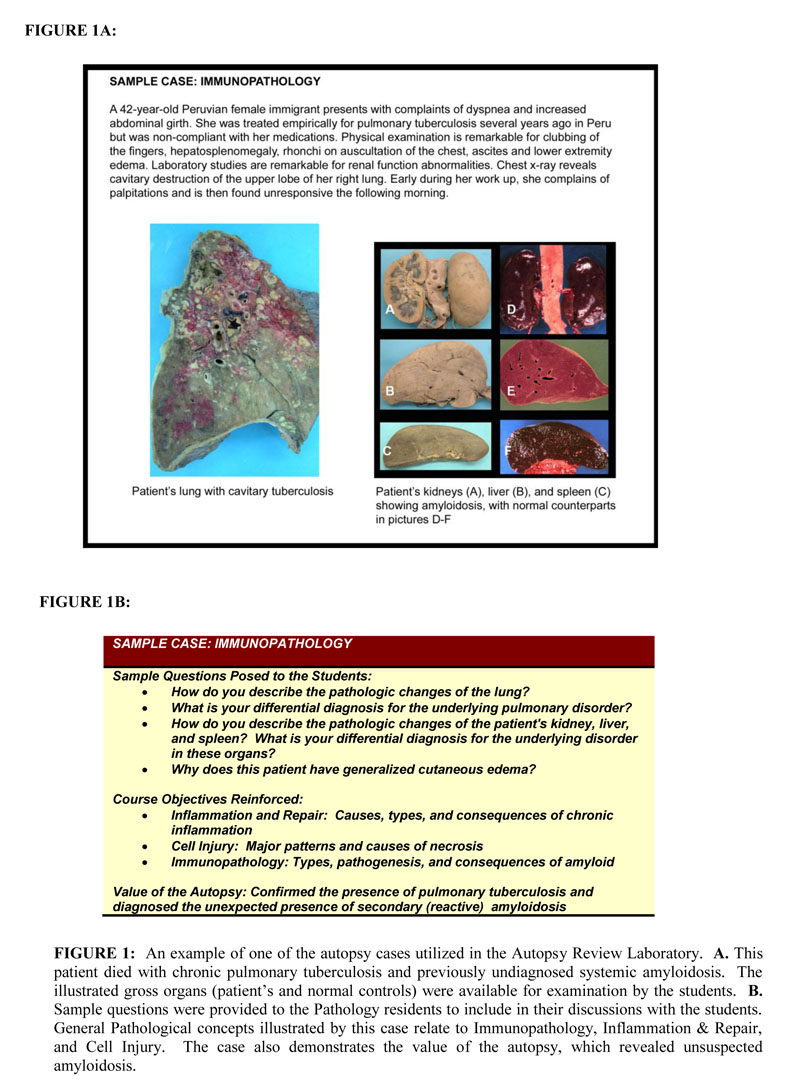 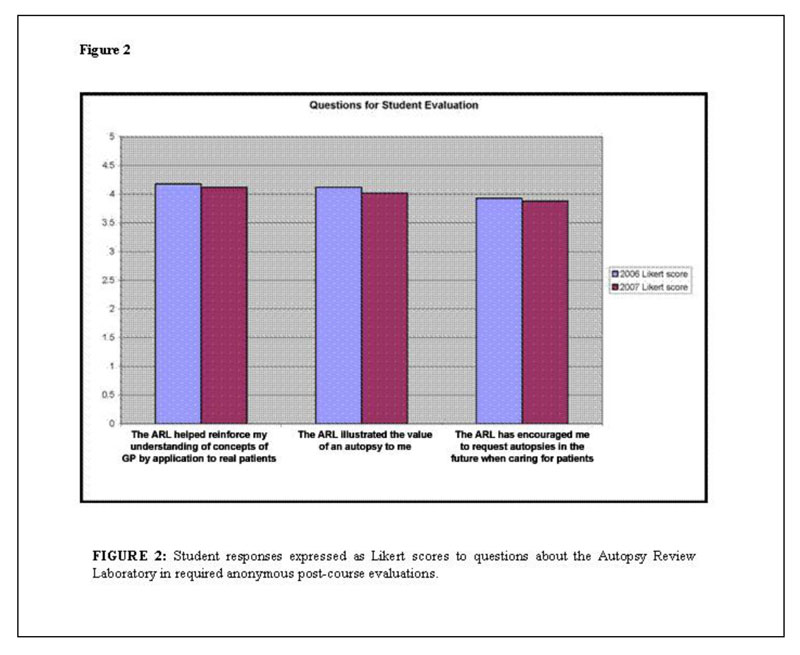 The autopsy has traditionally been valued as an important tool in medical education, representing the ultimate example of clinicopathological correlation. Despite the decline in autopsy rates in the U.S. over the past three decades, a number of studies have shown that the autopsy continues to yield valuable information.4-6 In addition, medical literature continues to support the essential didactic role of the autopsy,7-11 despite the trend toward computer-generated medical education in recent years.

Myriad factors have contributed to the decline in autopsy rates.12-14 Junior physicians and physicians-in-training have been swept up in a culture change in Medicine that relies, often erroneously, on the perception that autopsies will not reveal disorders that are not already documented by sophisticated imaging and technological medical advancements. Without an autopsy, the final chapter in our understanding of any patient’s medical course is left unwritten. From a practical standpoint, medical students are often no longer afforded the opportunity to participate in and learn from the autopsy.

While we strive to provide the students in our General Pathology course with the opportunity to attend the performance of actual autopsies, the short length of the course makes it impossible for all students to participate in this opportunity. Our eagerness to utilize the autopsy for its educational value in our course was a principal factor in the development of the Autopsy Review Laboratory. Our ARL differs from previously described programs that incorporated viewing autopsies during the medical school years.9-11 These programs generally involved small groups of students observing ongoing autopsy cases in rotation. Our use of selected cases allows focused, practical reinforcement of basic pathological principles covered in the course. The use of such “real” patients represents, not only the ultimate demonstration of clinicopathological correlation, but also the clinical relevance of general pathological principles in patient care.

Enlarging medical class sizes and increasing use of digital imaging in medical education, in recent years, have diminished the use of tangible specimens in the teaching of Pathology. The disappearance of gross specimens and microscopic slides from the curriculum has served to divorce students’ exposure to the practice of Pathology. Although this issue was not assessed, we also hoped that such a “hands-on” review of pathological specimens coupled with the clinical significance of the findings might illustrate one aspect of the working discipline of Pathology to the students.

By solicited anonymous evaluations, our students appear to have enjoyed the educational experience and found it a valuable learning opportunity. Statistical analysis of objective testing also shows that the ARL had a beneficial effect on short-term learning, perhaps most effectively for the lowest quartile of the class. Others have previously shown a similar disproportionately beneficial effect of supplemental educational exercises on students in the lowest academic quartile.3 We believe that the educational value of the ARL lies in its reinforcement of concepts previously presented. Its role in long-term learning has not yet been assessed.

While post-course evaluations suggest that students recognized the value of the autopsy to clinical practice, it is too early to assess the long-term effect of the ARL on these students’ future utilization of the autopsy in their own practice of medicine.

Resident instruction in effective teaching methods is an essential component of residency training at any academic medical center. Our ARL served as a valuable teaching experience for our Pathology residents by providing a structured forum for them to lead small-group instruction with constructive feedback by senior faculty.

The Autopsy Review Laboratory provides medical students with an enjoyable and effective learning experience by utilizing a multi-systemic, practical exercise for integration of General Pathology concepts in a clinicopathological context. In addition, the ARL enhances student appreciation of the value of an autopsy and allows Pathology residents to cultivate their teaching skills in a structured and supervised learning environment.