In Italy it is the responsibility of medical schools to train medical doctors, dentists, and specialists. How many for each category is determined by various mechanisms. The number of entering students is highly regulated, this being the responsibility of each school. Thus, the availability of teaching resources generally will determine the size of each entering class in Italian medical schools. The course of undergraduate medical training is 6 years.

For comparison, training for Dentistry requires 4 years. Programs for other health personnel (e.g. nurses, rehabilitation experts, logopedists, orthoptics, etc.), trained in the past by the National Health Service, have recently been assigned to University Medical Schools, generally with specific curricula of 3 years duration.

All training programs have a numerus clausus fixed by each medical school which determines the number of entrants based on the availability of instructors and of teaching facilities.

Until the mid-eighties, the curricula of all Italian universities were ruled by a law established in 1938. In 1986 a new law called for a radical curriculum reform of the undergraduate program in medicine, and this new curriculum was implemented in 1988 at all medical schools.

After seven years of experience, some aspects of the new curriculum have recently been modified, and thins “further reformed” curriculum is being implemented in the 1996-97 academic year. The following data are drawn therefore from the experience of the originally reformed curriculum, while the rules to which we will refer, are those of the recently modified curriculum.

Number of students and graduates

Until 1988, Italy was one of the few European countries with free admission to medical schools; i.e., there was no numerus clausus. Originally, this was not a problem since only students coming from the “Lyceum” could enter a University Medical School. Since Lyceum accounts only for a minority of all secondary school students, the number entering universities was reasonable. But in 1969 a new law allowed all students with a high school degree to be admitted to the university. As a consequence, during the seventies and eighties, an enormous number of students were admitted, and medical schools suffered an increasing and irreversible overload. This resulted in difficulties in teaching, particularly for bedside teaching which is essential in medical training. Another consequence was a high proportion of dropouts (more than 60%). Nevertheless, a high number of students were able to graduate, and the number of medical doctors rose in Italy to the highest level within the European Union (a doctor/population rate of 1:226 compared to an overall rate for the European Union of 1:302).

In 1988, the aforementioned reform of undergraduate medical studies was actually implemented, including also for the first time the task for each medical school to fix a numerus clausus. The student/population admission rate dropped remarkably thereafter to approximately 1:7,500 (overall European Union rate is l :9,200). Six years later, the student cohorts entering medical schools after that date demonstrated a normalization of the dropout rate; i.e. from 61% to 25%. It seems likely, however, that this 25% rate will decrease further in the coming years. The reduced number of students allowed for circumstances of better clinical training.

Unfortunately, the lower number of graduates will not decrease the overall number in the short term. Since the largest number of doctors graduated during the last 20 years, the present yearly graduation rate allows us to predict that the total number of doctors in Italy will continue to increase for at least the next twelve years.

Though each medical school may establish its own rules for student admissions, all schools have agreed to follow similar guidelines. Admission is based upon candidate achievement, with the first part (20% to 30%) of the overall admission score being allocated to the High School final graduation score. The remainder depends upon the outcome of a specific admission examination. This examination is a multiple choice test covering the basic secondary school disciplines of Biology, Chemistry, Mathematics, and Physics. In some universities part of the test items are based on pure logic and reasoning. Each year a national commission established by the medical schools prepares a catalogue of several thousands of items, elaborated, reviewed and corrected by the individual schools. This catalogue is also of great help to many schools in preparing their own admission examination.

The ratio between candidates for medical schools and entering students is approximately 1:2.5, admittedly somewhat lower than the European Union average ratio of approximately 1:3.

Once admitted, students begin a six year course of undergraduate medical training which is subdivided into 12 semesters: 5 pre-clinical and 7 clinical. The overall number of teaching/learning hours is 5,500 as requested by European Union directives. At present, a maximum number of 1,800 hours (33%) is allowed for formal teaching (lectures), and not less than 1,700 hours (31%) must be designated for practical and interactive activities, such as small group work and clinical practice. An obligatory internship requires approximately 800 hours (15%), and the remaining 1,200 hours (22%) are allowed for autonomous (independent) learning.

Traditionally, the teaching/learning program has been almost exclusively discipline-based, although recently, a strong impetus toward integration of disciplines has developed. It is certain this trend will continue and we expect to see even more integration planned for the future.
Clinical practice performed mostly during the last three years of the curriculum, is done only in the University hospitals. No involvement of the General Practitioners has been considered thus far.

The number of examinations within the 6 year undergraduate training period must not exceed 36, although students must successfully pass them all. These are mainly discipline-based exams, but the developing trend toward integration encourages cross disciplinary questions. The majority of examinations are performed orally, although a small proportion are written (so-called “objective assessment?), and a small proportion include some assessment of the student’s hands on clinical skills.

Quality assessment of the medical schools

A quality evaluation of the medical schools, particularly concerning teaching, has recently become part of national rules and will be implemented in the near future. This will be an internal evaluation, meaning it will be planned and performed by each medical school itself.

As mentioned previously, the new undergraduate medical curriculum was implemented in 1988. Following completion of the sixth year, a nation?wide inquiry attempted to establish the outcome of those students who had entered in 1988. The results are presented in Table 1 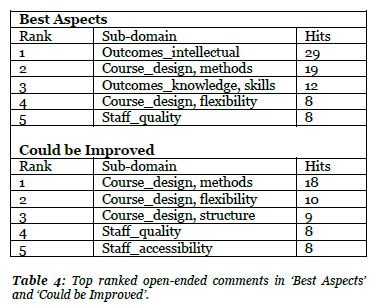 These data indicate that the percentage of students graduated immediately at the end of the sixth year seems very low, with the percentage of dropouts very high. However, these numbers are much better than those from previous years, and it seems quite likely these rates will “normalize” in the next few years.

BASIC SCIENCES IN THE UNDERGRADUATE MEDICAL CURRICULUM
a. Mandatory courses

In Italy, the basic sciences are taught during the first three years, or 6 semesters. In the recently modified curriculum, this will now require only 5 semesters.

Under present national rules, the following courses are mandatory: Physics, Statistics, Chemistry, Biochemistry, Biology, Genetics, Histology, Anatomy, Biophysics, Physiology, Pathophysiology, Microbiology, and Immunology. For several of the above-mentioned disciplines, only basic aspects are discussed during the first triennium. During the second triennium, they are again considered but from a more clinical point of view: Epidemiology, Medical Genetics, Clinical Biochemistry, Clinical Microbiology, and Clinical Immunology.

Beyond formal lectures, other teaching/learning activities in basic sciences in Italy include small group work for solving biological problems, computer-aided learning, and practical laboratory work. Although small group work is used in a relatively low proportion of medical schools, the use of computer-aided instruction is increasing continuously. Practical laboratory work is seen less, the reasons being a relatively low number of teachers in basic science disciplines and the lack of laboratory facilities for students.

The shortage of space and facilities for teaching activities other than formal lectures is a common problem all over Italy, and the reason lies in the last 25 years of history of Italian Universities. During that time and especially during the seventies and eighties, the huge increase in student admissions resulted in two major consequences. The first was that available space for practical activities became absolutely insufficient, the number of students being so high there was no hope to provide adequate facilities for all. The second reason was that the number of instructors became dramatically insufficient, and consequently a large number of new faculty were recruited into medical schools. Space previously used for student activities therefore had to be given to the new faculty as offices and research laboratories. This situation has recently improved however, with the new law permitting fewer numbers of annual entrants, and the slow but steady construction of new student facilities.

Many students choose to quit medical training before the end of their program. The results of the national inquiry recorded in Table l allowed us to analyze the exact time when students left medical school. Table 2 shows the percentage of students leaving after each curricular year.

It is clear that the great majority of dropouts leave medical school during the pre-clinical years. This is not an unexpected finding since the pre?clinical triennium is often considered by students to be heavier than the subsequent one. In fact, a high proportion of medical students entering the clinical triennium had not yet completed all the exams required during the first three years. Still, quite a number of these students were able to graduate at the end of the sixth year. To do this required that they pass the current examinations (of year 4) while also preparing for, and passing, their remaining exams from the first triennium.

Taken together, Tables l and 2 demonstrate that while we have had success, some problems still remain within our system. Initially these problems were caused by excessive enrollment, but this has been corrected through our laws and reformed admissions procedures. However, the difficulty of learning the scientific disciplines presented in the first triennium remains a challenge for every medical student. As no law must compromise the necessity of a firm foundation in the sciences, we must find other answers to this problem of the heavy burden of training in the first years of medical school in Italy.